These works are dotted throughout the text as emblematic image compositions of my aesthetic response to the notion of dark euphoria. They are also an intervention into the fabric of the digital image and an attempt to expose what I understand to be the properties of the digitally captured and manipulated photographic image. Several works from this series appear in the discussion pertaining to the light on dark aesthetic and machine visualisation of scientific data (see thesis, pages 34, 159-161 & 196).

The dark euphoric moment as noted by Bruce Sterling is upon us.  In his keynote address at Reboot 11 in Copenhagen in 2009, Sterling described the condition as the reverse of the previous century’s rapid evolutionary progress – of economic growth, of dominance over nature, of mastery of invention and of the voracious consumption of fuel.  In Sterling’s future, indeed our future, “the actual objective situation looks more like this: no money, scarcity, financial collapse, collapsed states, general precarity, an energy crisis, low intensity global warfare, and a rapid advancing climate crisis” (Sterling 2009).  Yet in parallel to this condition is the techno utopian facade of machine edged stainless steel, touch sensitive glass, hyper colour metaphors for communication networks and social exchange, where the logos for our devices and our apps and our operating systems become the stripes and badges and flags of our cyber utopian identity.

Mythical eruptions of device envy have replaced the rabid consumption of the domestic machines of the previous mid-century zeitgeist – washing machines, cars, televisions and microwaves – and a fresh layer of representative technology sits precariously at the edge of the new real.  The euphoria exists here – within the pixels and the bandwidth –  temporary and fatalistic as it may be, it breeds an overwhelming sense of gothic revivalism in the expression of those pixels in familiar cultural forms – film, music, literature and the visual arts.  While the expressions of community, information exchange, data visualisation and the extreme forms of image reproduction are laced with the primary colour experiments of the Futurists the canvass is not white, the surface is not tactile – it is black, soft and impermanent. 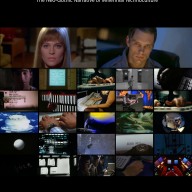